I’ve done a lot of research on this, looking at the data from National Grid at BM Reports, Gridwatch, and a very helpful frequency chart at 1 second resolution from Upside Energy, a small company providing experimental token grid stabilisation services using distributed systems (a potential precursor to such things as V2G). You can see that their effort was very prompt but puny at under 6MW for about 3 minutes in this chart they tweeted 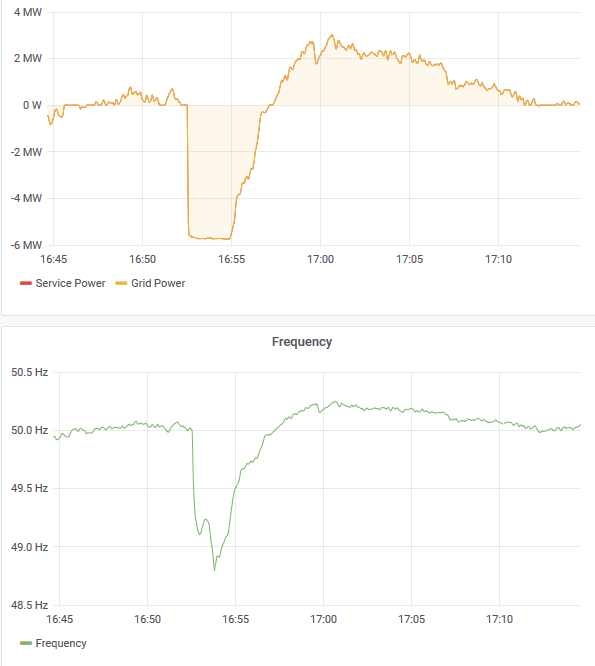 Here’s what I found:

I think the conclusive answer to the question is yes – the blackout’s primary cause was the sudden loss of output from Hornsea wind farm, though the precise cause of that remains unknown at this stage: likely candidates are a failure at the offshore transmission platform where the voltage is boosted to 220kV, somewhere along the cable to shore, or at the grid connection point (at Killingholme on the Humber) onshore. The really damning evidence comes in this tweet that shows grid frequency based on 1 second data:

The extremely rapid initial drop in frequency at 15:52:32Z to below the statutory minimum of 49.5Hz is compatible with the drop in wind generation of about 850MW recorded in grid 5 minute data (although there appear to be timing discrepancies between the frequency and power data – but I would regard the frequency data as conclusive, especially with wind). That is followed by a small bounce as the grid starts to try to recover, before a further smaller collapse in frequency to the nadir at around 48.8Hz, which is entirely consistent with the smaller drop in CCGT output recorded in grid data that suggest that Little Barford was probably operating at about 50% of its 727MW capacity. There is a major grid transmission line that runs from Keadby near Killingholme past Little Barford at St. Neots and on to the transmission ring around the North of London. It is almost certain that this power line was delivering power from the wind farm towards London. When that failed, there would have been a sudden extra demand on Little Barford, which would have caused its frequency to drop and that (if not the already rapid drop in grid frequency) would have tripped it out of operation.

Do not be deceived by the reported outage times on the plants. The formal record shows that Little Barford announced it had zero capacity at 15:55:37Z w.e.f. 15:57:40Z (compare with the chart above). Hornsea is shown as having zero capacity w.e.f. 16:00:00Z – which is a highly unlikely timing, except that it coincides with the start of the next settlement period. That report was not submitted until 16:19:48Z, over 20 minutes after the main event. By 16:00Z the grid frequency chart shows that balance had been restored by the combination of load shedding and running up Dinorwig pumped storage to nearly 1GW, OCGT rapid response, and diesel STOR. It seems that management decided not to report the real time of the loss of power for reasons that might vary between inadequate monitoring systems, or a failure to understand the need to report the true time rather than the next half hour settlement period time, or simply to lie to cover up having reviewed the evidence.

That these disturbances caused such a rapid and severe frequency drop that triggered load shedding is entirely due to the lack of grid inertia caused by the high proportion of generation from wind and solar, which had been running at over 40% most of the day. A 2016 presentation from National Grid has a chart that shows the relationship between the rate of change of frequency that can be expected for different amounts of load loss at different levels of grid inertia: it suggests that they were sailing far too close to the wind. You can think of grid inertia as the flywheel energy stored in the rotating heavy generator turbines. It is measured in GVA.s, which you can think of as gigawatt-seconds. Divide by the level of grid demand, and it tells you how long the energy would last if it instantaneously could become the only source of power on the grid. That gives a measure of the response speed required from backup generation (spinning reserve, fast start, grid batteries etc.) if grid frequency is to stay within limits that avoid blackouts. You have to suspect that at Grid HQ in Wokingham, they will be thinking about having a larger level of spinning reserve, and about curtailing wind to ensure that there is more inertia.

I note that today the formal record of the timing of the shutdowns has magically disappeared. More questions to be answered.

Transport chaos across England and Wales after major power cuts

View all posts by phil salmon