Weather is of the atmosphere, climate is of the ocean. It’s hard to tell intuitively if weather changes in the long term since it’s so chaotic and variable anyway. Nonetheless, human memory is – just about – long enough and reliable enough for real trends of changing average weather, to be discerned. This we call climate change. Globally distributed thermometers do confirm oscillating changes in regional and global temperatures. Considerable political capital has derived from the perception of  “climate change”.

Climate change is driven by the ocean. About a billion cubic kilometres of water hold an unimaginably vast amount of heat – 97% of the heat in the climate system. The other 3 percent is in the atmosphere. The importance to climate and climate change of those two fluid layers around the earth is in proportion to those heat percentages.

This is not an article describing the global ocean circulation. Briefly, the world’s oceans are linked in a conveyor belt type circulation that takes about a millennium to make a full circuit. At any place in the ocean, whose average depth is 4 km, currents at the surface and at the ocean floor can be in different, even opposite directions. At a millennial scale it all ties together. What makes ocean circulation important for climate is the sharp temperature gradient with depth that is found across all the world’s oceans. Water temperature at the ocean floor, kilometres down in eternal darkness, is cold, always cold, close to freezing point even in the tropics where at the surface the water temperature approaches 30C. So a sharp gradient exists from surface waters that can be tropic-warm, down to the always freezing ocean floor. About 50-300m down, the temperature gradient is especially sharp, dividing a warm surface from a cold deeper layer: this is called the thermocline and plays an important role in the distribution and behaviour of marine organisms. A lot of plankton creatures perform remarkable daily vertical migrations between the thermocline by day and the surface by night. (Squid fishermen take advantage of this – that’s where your calamari comes from.)

If surface climate is warm, this warmth only exists with the ocean’s consent – not far away at the nearest deep ocean, a cold hand from below can take away summer and replace it with winter. Only when that deep cold remains quiescently buried under a stable ocean stratification, beneath the thermocline, can a warm climate beneficial to living ecosystem, endure.

Understand this and it will become immediately clear that the world’s climate is controlled by a single simple ocean variable. Vertical mixing. To illustrate, here’s a simple and extreme thought experiment. A giant, deus-ex-machina spoon descends from the heavens, and stirs the world’s oceans vigorously, until the temperature is uniform from top to bottom. Now there is no more temperature gradient but a constant ocean temperature. What would that temperature be? Something around 3-5 degrees C. And what would them be our weather-climate? This would be catastrophic for life on earth, a global ice age would ensue.

On a smaller, more realistic scale, one can see that, with the normal stratified oceans with warm surface water and near freezing ocean floor, even a small change increasing vertical mixing, coughing up even a little of the deep cold, can cool climate at the surface.

What this means is that if one wants to see what climate change might lie ahead, the best place to look is the deep ocean. Is anything changing in the deep ocean currents that might signify impending alteration to weather-climate? The ocean is big and changes in ocean circulation are slow. Millions of cubic kilometres of seawater don’t change direction or temperature overnight. But watch and wait patiently in the right places and trends can be discerned, signifying future change.

So what, if anything, is happening in deep ocean circulation? Three changes have been measured at different parts of the globe, and all of them show cooling.

A recent paper reports a strengthening of cold downwelling currents into the Antarctic bottom water, in the far south Atlantic:

Here is a map of the regional where several research ships over a decade or more have detected cooling at the near-Antarctic ocean floor, signifying strengthening cold downwelling: 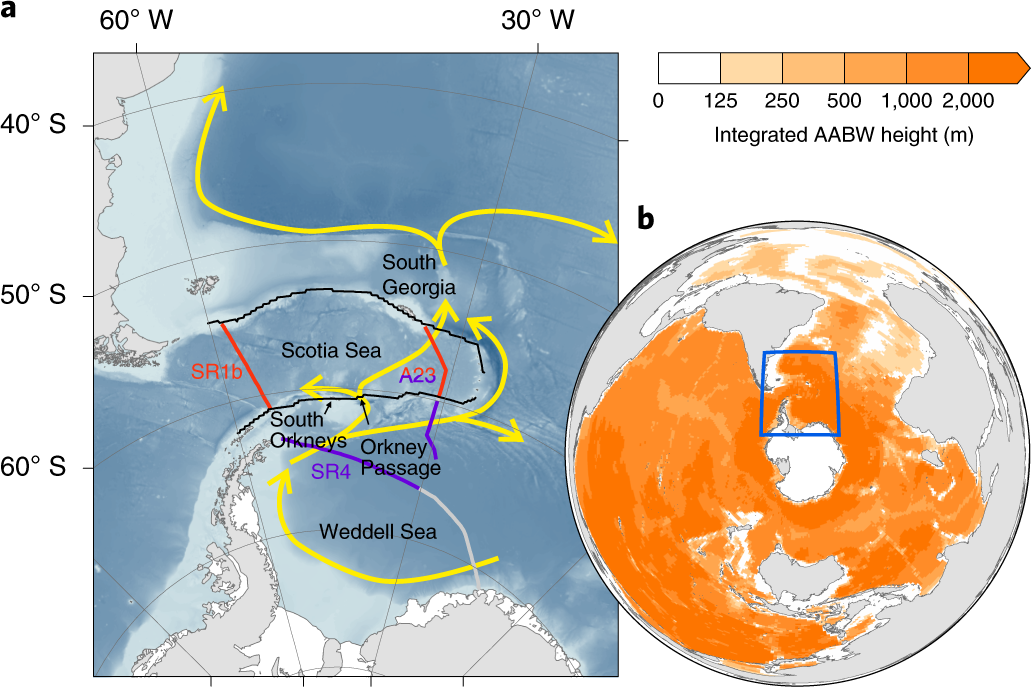 That image is linked here:

This is surprising in the context of a recent general warming trend in the world’s ocean and climate. The authors nevertheless assert that this reversal of prior warming to distinct cooling is notable, and calls into question whether the recent global warming trend will continue, or else might conceivably turn around into cooling – as part of a natural long term oscillation. In the author’s words,

“Our findings indicate that the previously observed decline in the supply of dense water to the Atlantic Ocean abyss may be stabilizing or reversing and thus call for a reassessment of Antarctic influences on overturning circulation, sea level, planetary-scale heat distribution and global climate.”

Another surprising statistic I learned from this paper is that AABW (Antarctic bottom water) accounts for 35% of the volume of the whole ocean. A third of the ocean volume! That’s massive. A cooling trend there is worthy of attention surely.

2. The Humboldt current has cooled sharply in the last century to its coldest in the entire Holocene

Also in the Southern Hemisphere, this time along the west coast of South America, the Humboldt deep ocean current flows north from Antarctica toward the equator. (This I guess is also AABW?) This is reported in the following paper:

This below figure is complex but focus on part d. This is a graph of measured temperature of the deep Humboldt current. At the very end at the right, it turns down sharply, signifying pronounced cooling in the last one or two centuries. The authors state that the Humboldt temperature in the last half century – fifty years only – is the coldest of the whole Holocene, the last 12,000 years. 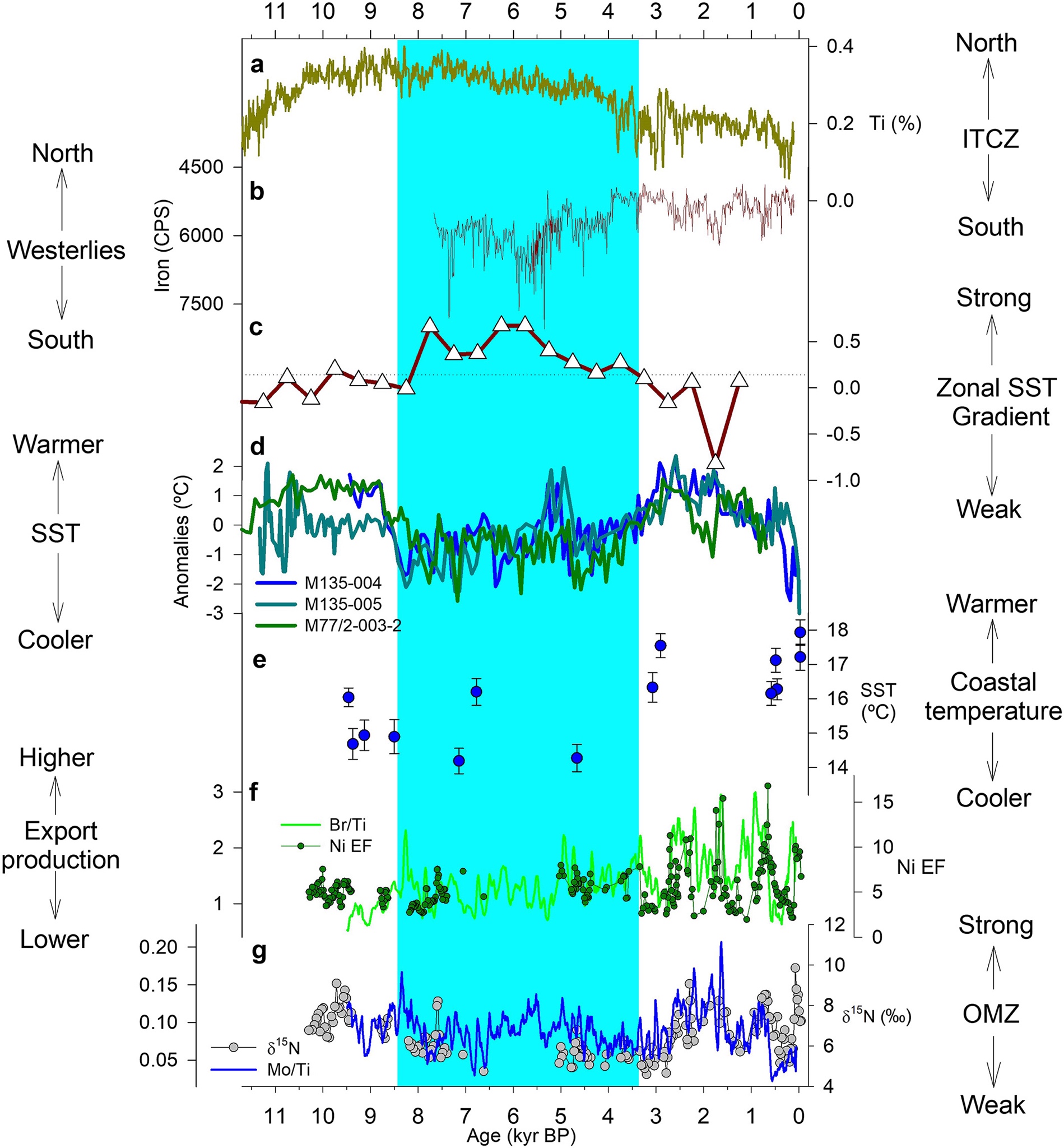 This cool Humboldt water surfaces periodically in the sea waters off the coast of Peru, where the deep cold waters bring nutrients that increase primary plankton production and result enhanced ocean productivity in the form of huge shoals of anchovy. This upwelling also drives the El Niño Southern Oscillation it ENSO, the oceanic oscillation between cooler or warmer Pacific sea surface temperatures that influences weather-climate worldwide. But the cool Humboldt waters driving the recent ENSO dynamics are a relatively recent phenomenon.

This article by Pierre Gosselin documents recent cooling in the North Atlantic:

“From 2008 to 2016 a widespread cooling ranging from 0.6°C to more than 2.0°C has chilled effectively the entire oceanic region from E. Canada to N. Iceland to S. Europe. The cooling persists year-round and extends from the surface down to depths of 800 m.”

A temperature change map shows where most of the cooling in the last decade has occurred: 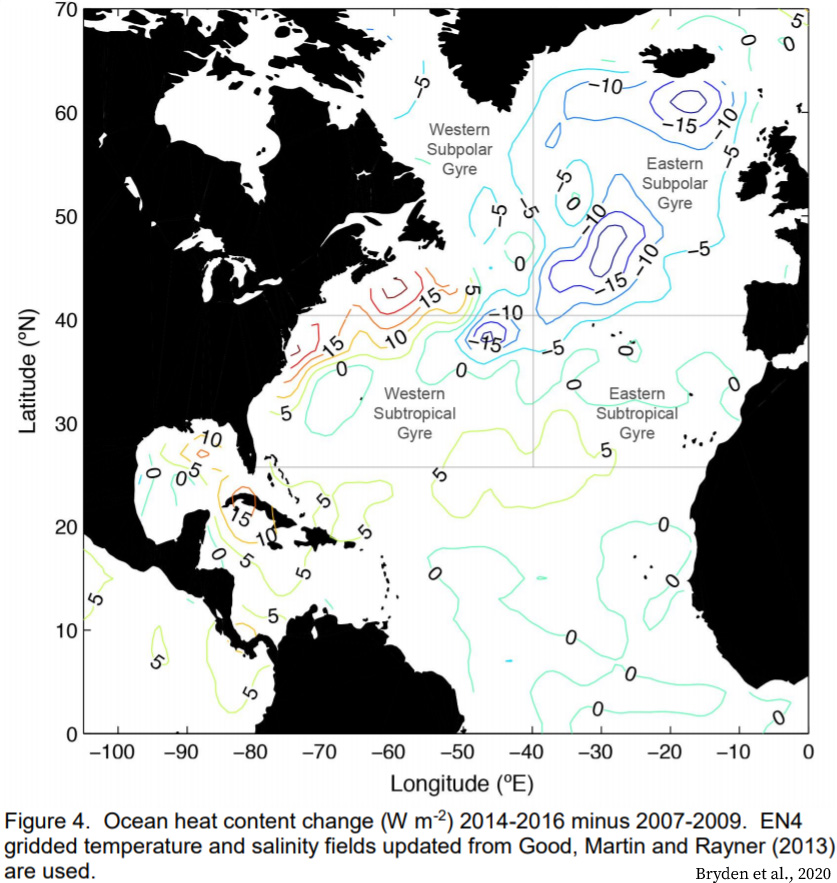 One tangible consequence of this recent and current North Atlantic cooling is a dramatic end of the retreat of the biggest glacier in Greenland, the Jacobshavn glacier. As the above linked NoTricksZone article explains, till 2016 this glacier was retreating and thinning, making it something of a poster child for global warming. But ever since 2016 this has reversed to advance and thickening of the same glacier, even as the water of the nearby sea, of Disko Bay, has cooled by a whole 2 degrees C – a substantial cooling by ocean standards where fractions of a degree are significant and involve massive energy flows. (Is now we don’t hear so much in the media about the Jacobshavn glacier!)

So in summary, in widespread locations off Peru, around Greenland and near South Georgia in the South Atlantic, a significant cooling of ocean currents and layers has been detected, including substantial deep ocean currents. This has in all cases been a recent transition to cooling, breaking or reversing previous trends. By themselves, it is not clear if they represent any global transition to imminent climate cooling. Perhaps they will prove transient and reverse, following a more general warming trend. But if they do continue, and are joined by other further instances of ocean cooling, especially in the deep ocean, then this could be the first indication that a period of climate cooling may lie ahead.

3 responses to “Something’s stirring in a deep Atlantic trench”